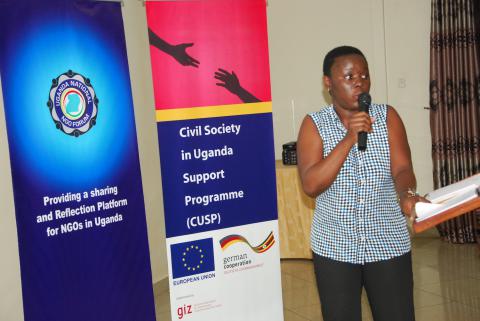 CSO leaders from Northern Uganda have called upon Government to align the Third National Development Plan with the Northern Uganda Regional Development Strategy in order to spur inclusive development in the region and country generally. This call was made during the Northern regional CSO consultative meeting on the NDPIII whose objective was to provide a platform for sub national actors to contribute to the NDPIII formulation process. With support from GIZ/CUSP, the meeting (#NDPIII19) was held on 8th August 2019 at Bomah Hotel Gulu and brought together over 50 CSO leaders from the districts of Gulu, Agago, Amuru, Kitgum, Lamwo, Nwoya, Pader, Omoro, Pakwach, Alebtong, Amolator, Apac, Dokolo, Kole, Lira, Otuke, Oyam and Kwania.

Over the past 13 years since the conflict ended, several efforts have been made to rebuild Northern Uganda. With assistance from the Government of Uganda and development actors, various development efforts have expanded health, education, necessary infrastructure and most importantly allowed people to resettle in their communities. While the region is experiencing peace, the effects of the conflict are still palpable. Contextual factors such as geography, resources, history, culture and demographics profoundly influence conflict dynamics. Historical divisions reached a peak with the conflict between the LRA and Government of Uganda destroying much of the society and degrading the social fabric within communities across Northern region. The aftermath of the 20 year civil war negatively affected livelihoods, education and health, all of which contributed to widespread poverty and thus limits future progress in human development for the region. Against this background, the Northern Region Development strategy 2020/21- 2034/35 was formulated.

The formulation of the Northern region development strategy began in December 2016 when Uganda Local Government Association (ULGA) convened a stakeholders’ meeting in Gulu to propose a regional partnership. In March 2017, approximately 200 stakeholders from Northern Uganda assembled in Arua, agreed to embark on a regional development process and selected an interim steering committee to lead the development of the regional strategy. Once established, the steering committee began the process of consulting with various sections of the citizenry in Northern Uganda, including government and private sector officials.

The Northern Uganda Regional Development Strategy aims to steer a paradigm shift that promotes high productivity through engagement in commercial agriculture and the manufacturing sector. This fifteen year strategy recognizes that advancing high employment and high productivity in manufacturing is not immediately possible. Instead, it seeks to set the ground work and the necessary preconditions for large-scale development to occur.

Speaking at the meeting, Mr. George Otto Executive Director of Pader NGO Forum noted that the goal of this strategy is to “accelerate structural transformation to enable long-term sustainable and inclusive socio-economic development in Northern Uganda”. He added that achieving this goal will require strengthening the competitiveness of agriculture production and processing for international markets. Aligning to the goal are four thematic pillars;

As Government embarks on the NDPIII formulation process, CSO leaders in Northern Uganda unanimously called for investment in the above four pillars as a strategy to achieve inclusive development and also ending the regional inequality in Uganda. According to the Uganda Poverty Status report 2014,  Karamoja region has the highest percentage of poor people at 74%, followed by West Nile at 42%, followed by Lango and Acholi at 35%, Eastern with 24.7%, Busoga with 24.3%, Bunyoro, Tooro, and Rwenzori with 9.8%, Ankole and Kigezi with 7.6%.