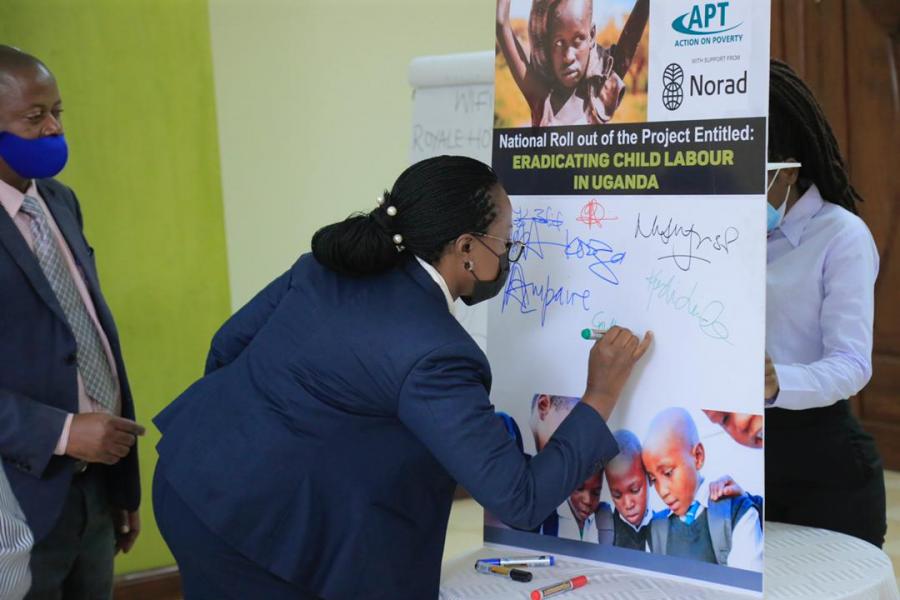 According to the 2017 Humanium report, rural children are three times more likely to be employed than city children with a child employment rate in rural areas at 34% compared to 11% in urban areas.

Nearly 96% of employed children between the age of 6-13 work in the agriculture sector, the remaining fraction 4% are distributed across the other sectors; Worst forms: commercial sexual exploitation, human trafficking, forced labour in agriculture, using children for illicit activities such as smuggling and stealing due to human trafficking.

It’s against this backdrop that on 20th May 2021, Platform for Labour Action (PLA) in partnership with Action on Poverty UK and with support from Norwegian Agency for Development Cooperation (Norad) launched a project titled; Eradicating Child Labour in Uganda whose goal is to contribute to the reduction of child labour in Busoga sub-region and greater Kampala area. The project that will run for 2 years and 9 months aims to ultimately:

Speaking at the launch, the Deputy Head of Cooperation at the Royal Norwegian Embassy Ms. Lindoe Kjersti emphasized the role of CSOs in combating modern slavery and appreciated PLA for securing funding to implement this project which will enable them to contribute towards the implementation of SDG 4 and 8.

Mr. Tollea Franco the Assistant Commissioner Youth and Children Affairs at the Ministry of Gender Labour and Social Development celebrated the timeliness and great relevance of this project as the government had just rolled out the National Child Policy 2020 - whose vision is- “a society free of exploitative child labour, in which all working children enjoy their right to childhood, education, dignity &full development of their potential”.

Ms. Grace Mukwaya the Executive Director PLA noted that as an organization, they were playing their part and challenged all stakeholders to do the same by cascading the role of families in ending child labour.

It is important to note that child labour denies children their fundamental rights such as the right to education, the right to rest, and leisure, which are important for their proper growth. These rights are upheld by international conventions.