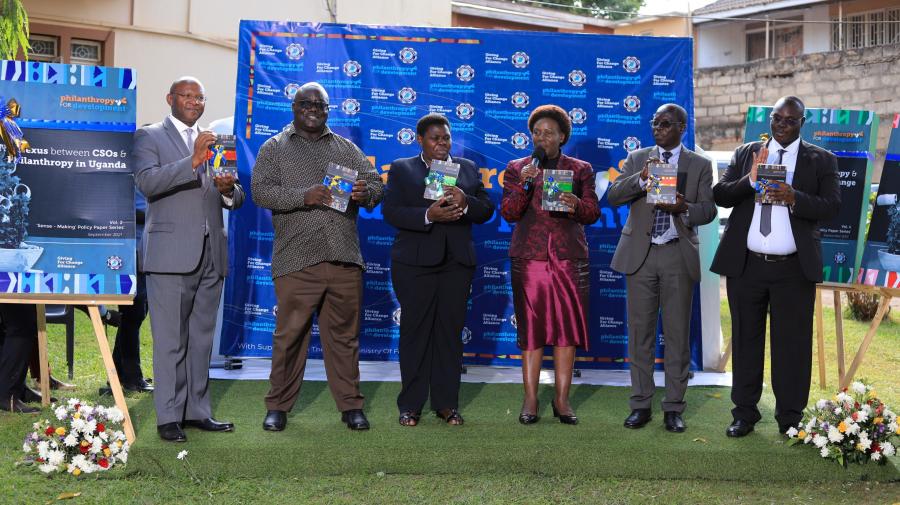 “Philanthropy” is usually associated with funds flowing from the Global North to the South to drive development.

Uganda National NGO Forum (UNNGOF), under its Philanthropy for Development programme, sets out a bold vision for transforming how “development is done” by focusing specifically on the recognition and importance of domestic resources in increasing local ownership, unlocking agency, and strengthening communities’ ability to claim entitlements from different actors, especially government.

To clearly understand the philanthropic arena in Uganda, in 2021, UNNGOF partnered with the Centre for Basic Research (CBR) to compile a body of knowledge dubbed the Sense Making papers on Philanthropy;

Speaking at the launch, Ms. Sarah Pacutho, Team Leader – Civil Society Strengthening, stressed that the role of the Philanthropy for Development programme is to build a social movement that believes in giving and domestic resource mobilization.

She emphasized that the purpose of the Sense-Making Papers was to understand and appreciate the different facets of philanthropy, such as the contribution of women and youth and whether or not there is a need for regulation.

“We hope that these 5 papers will make a very integral contribution to the understanding of philanthropy or giving in Uganda. From that point, we can build on to make this country a better place for every citizen because at UNNGOF, the citizen is central.” - Ms. Sarah Pacutho

Contrary to the narrative that Africans are poor and don’t give enough, he posited that giving and philanthropy are embedded in the life system of being an African.

“When you’re an African, nearly everything you do has to do with giving. It is captured in the diversity of ways in which we live, helping relatives, contributing to weddings, giving of time in different ways.” - Mr. Richard Ssewakiryanga

Africa has been seen as the recipient of philanthropy, yet there’s a lot of giving that remains undocumented. It has been called ‘gifting’ because of the positivity of the character of generosity among Africans.

The evidence is clear that giving is huge in Uganda, and with generosity at community level at an all-time high during the pandemic, it is no wonder that Uganda is the 8th most giving country in the world! [Charities Aid Foundation World Giving Index 2021].

Mr. Paul Mulindwa, Executive Director – Kitara Civil Society Organisations’ Network (KCSON), noted that communities give in several ways beyond hard currency. For example, they give their time to help children and the elderly by escorting them to access social services. He highlighted the need for mindset change among some communities that value foreign aid above the local giving.

The Chief Guest, Hon. Flavia Kabahenda, Chairperson - Gender, Labour and Social Development Committee (Parliament of Uganda), noted that philanthropy could take center stage as the government builds resilient communities where all can thrive through initiatives like the parish development model. She challenged philanthropists to create value and be accountable to society to truly succeed.

The launch highlighted that for philanthropy or giving to flourish, we need to work together towards research and documentation to facilitate policy-makers to create an enabling environment.

As one of the key promoters of QuAM, UNNGOF participated in a QuAM workshop organized to establish and strengthen the capacity of QuAM structures in Ankole region.

This is K on the afternoon of the 27th of June 2022.  She is 16 years old, loves history and dreams of one day becoming a lawyer. In her arms she is holding her daughter Hamira, who she gave birth to just that morning.

The Untapped Potential of Philanthropy!

“Philanthropy has the potential to spur community transformation if put to proper use.” - Dr. Jacklyn Makaaru Arinaitwe.

Youth should participate in the SDGs Localization

Youths in Uganda have been tasked to participate in the localization of the Sustainable Development Goals (#SDGs).