Social Security for informal economy is a national concern! 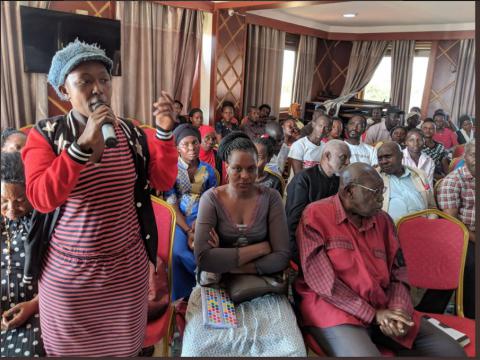 Extending social security to the informal economy has become a national concern that should not be left to the private sector alone. Workers in the informal economy in Uganda are generally not covered by adequate social protection.  Existing social insurance mechanisms are generally not adapted to the structure of the labour force and access to social assistance programmes is limited. This makes informal workers a very vulnerable and sizable proportion of the Ugandan population.

Speaking at the public dialogue on Social protection for the informal economy in Uganda held on 19th July 2018 in Makindye Division-Kampala, Mr. Ramathan Ggoobi noted that 90% of the working population outside agriculture are in the informal sector. He quoted the 2016 Informal sector survey conducted in Kampala, Wakiso and Mukono which indicated that its largely concentrated in non-tradable services (non export) whereby 56% are doing retail and transport services, 26% in restaurant and bars, informal manufacturing 13% while 4% in Agriculture. Mr. Ggoobi stressed “The informal economy is here to stay, therefore Government should intervene and create policy biases that have favored the formal economy to graduate. This can be through low licenses, micro-credit services, basic book keeping trainings, technical extension services, better infrastructure so that the informal economy can also graduate to another level.”

The size of Uganda’s labour force is large. But according to the 2017 World Bank study for the extension of pension coverage for the informal sector workers in Uganda, only about 2 million individuals (11% of the workforce) are covered by formal pension arrangements. These include 307,000 covered by the Public Service Pension Fund (PSPF); approximately 1.6 million salaried workers employed in private firms and contribute to National Social Security Fund (NSSF); and 24,000 salaried workers participating in voluntary pension schemes by various employers. 89%, mostly non-salaried informal sector individuals are excluded from formal pension arrangements. They include, but are not limited to daily wage workers, domestic helps, unpaid workers, street vendors, transport workers, self-employed professionals, and farmers. These citizens will be unable to sustain themselves after retirement without a pension cover. This also implies that old-age poverty will continue to increase especially for the country’s unpaid workforce.

It is against this background that the Uganda Social Protection Platform (USPP) with support from FRIEDRICH EBERT STIFTUNG (FES) has planned public dialogues (six 1-day events) at national level and each of the five divisions of Kampala City to generate public dialogue on the viability of providing pension coverage to the informal sector, and the attractiveness of several pension schemes and options to the informal sector workers. The first public dialogue  organized by DRT on behalf of USPP was held on 19th July 2018 at LandStar Hotel Lukuli, Makindye Division bringing together 120 participants (including domestic helps, street vendors, transport workers, self-employed professionals, salon workers, among others). The objective of these dialogues is to “stimulate informal sector attraction to the adoption of pension schemes for informal sector workers”. The dialogues have guiding topics that are discussed by knowledgeable social protection and pension experts from both government and non-government agencies as shown below;

As an outcome from the meeting, there was consensus that social protection can contribute to the transformation of a society as it can enable citizens to change from living their lives with a focus on survival to a life where one has a better control over their fate. The dialogue also provided an avenue for informal workers to understand and appreciate social protection; a participant said “This is a unique workshop full of learning”, another participant stated “This is my first time to hear about National Social Protection Policy”. Such feedback challenges government and CSOs to create more awareness on social protection.

The next public dialogue will be held in Nakawa Division on the 26th July 2018.

Use NDPIII to revive Masaka Town

Masaka is the fo