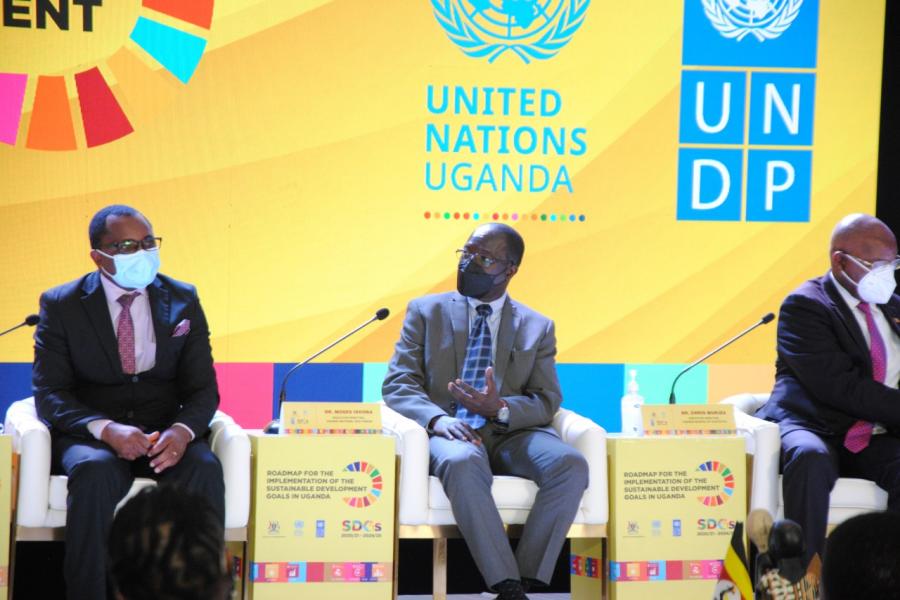 "An open and vibrant civic space is key to a country’s development."

It is no secret that Uganda played an important role in the process leading up to the adoption of the 2030 Agenda, including through the leadership of Honourable Sam Kutesa as President of the General Assembly. Uganda was taking important steps to bring the SDGs to life even before they were adopted, notably by integrating them in the second National Development Plan and thereby translating them into nationally owned and country-led development strategies.

As we implement the Decade of Action with 9 years left to achieve the Sustainable Development Goals (SDGs), on 15th September 2021, Uganda launched the second 5-year National Roadmap aimed at accelerating the implementation of the SDGs. The roadmap was launched by Rt. Hon. Prime Minister Ms Robinah Nabbanja under the theme: SDGs Integration and Acceleration in Uganda: Building Forward Better from the COVID-19 Pandemic, spells out the government’s ambitious plans to attain the goals by 2030.

The Prime Minister called for partnership and collaborations among government, civil society, private sector, UN system and other actors if we are to achieve the SDGs. She also underscored the need for resource mobilisation for the SDG implementation.

In her remarks, the Hon. Minister for General Duties and Focal Minister for Sustainable Development Goals (SDGs) in the Office of the Prime Minister Justine Kasule Lumumba remarked that the new roadmap has been developed for the period from 2020/21 to 2024/25, aligned to the third National Development Plan (NDPIII) whose goal is to increase household incomes and improve the quality of life of all Ugandans.

Dr Moses Isooba ED, UNNGOF stressed the SDGs are our reality and called for inclusiveness of all Ugandans in the SDG implementation since they are the beneficiaries and implementers of the SDGs. He highlighted the need for the domestication of SDGs into language that is easily understood by everyone. Therefore he emphasised that civil society is has a key role to play in ensuring that the SDGs are translated into local languages.

"For us as the citizen-centred civil society sector, we understand that the most important thing is to make sure that every last person is reached. We are committed to utilising our grassroots connections to ensure that this new ambitious SDGs roadmap is achieved." Dr Isooba noted.

Recommendations for accelerated implementation of the roadmap included the inclusion of women, youth and the private sector in the implementation and planning processes, as well as embracing data generated by civil society organisations.

Ms Susan Ngongi Namondo, UN Resident Coordinator noted that the current situation in Uganda calls for truly extraordinary measures if we are to catch up to the implementation of the SDGs as detailed in our development plan. The UNDP Resident Representative Elsie Attafuah, commended Uganda’s progress in several areas including the size of the economy, increased GDP per capita growth in total exports of goods and services, increased total paved road network, increased electricity generation but a lot still needs to be done.

Representing development partners, Richard Nelson – Mission Director USAID Uganda said, “The CSOs and NGOs are integral to the work we are doing with the people of Uganda and they must be allowed to continue to work."

On the same day, the SDG Secretariat Innovation Hub was launched at the Office of the Prime Minister, under the theme: “Sustaining Innovation Through Enhanced Collaborations for SDG Acceleration”.

The launch of the SDG Secretariat Innovation Hub establishes its central role in the coordination of the actions stipulated in the new roadmap and leverages existing and new collaborations to simultaneously accelerate the implementation of SDGs.

Speaking at the launch, Dr Moses Isooba reaffirmed the commitment of CSOs to leave no one behind.
“We have been working since the Millennium Development Goals, and launched the Tondeka Mabega campaign in 2019. This shows our commitment to the people and we shall work with the SDG Secretariat to achieve the ambitious goals.”