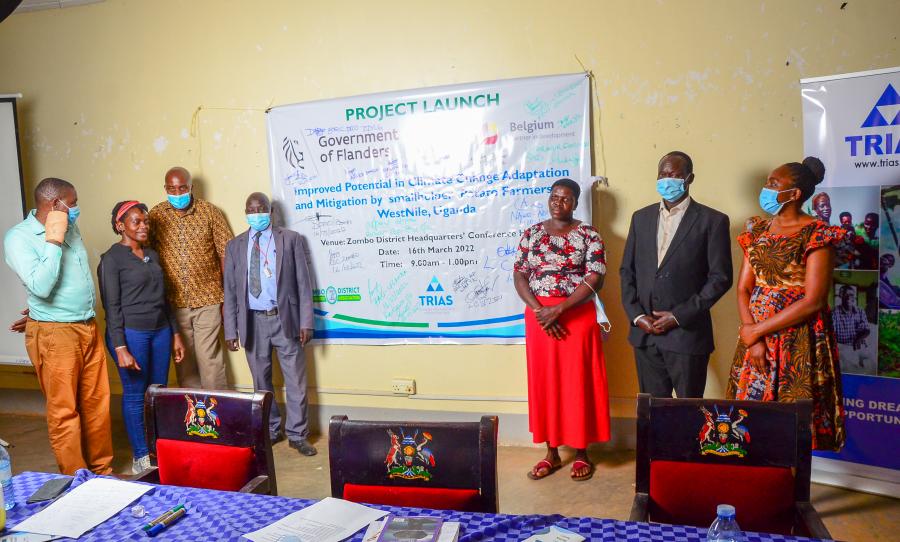 The Global Sustainable Technology and Innovation Community (G-STIC) is set to support smallholder farmers active within the potato value chain in Zombo District to adapt and mitigate shocks of climate change in order to improve the potato value chain and the incomes thereof. This was affirmed at the launch of the G-STIC Climate Change Program that was held on 16th March 2022 at Zombo District Headquarters attended by key district leaders (political and technical), members of ZODFA, representatives from NARO, FAO, members Nyararuv SAACO, NGOs representatives and local media.

Mr. Januario Ntungwa the Trias Uganda Regional Director noted that this project will be implemented by Trias Uganda in partnership with Agristo and Zombo District Farmers Association with funding from the Government of Flanders; the major objective being climate change adaptation and mitigation by small scale holder potato farmers in West Nile Uganda, G-STIC pledges to increase the supply of climate-resilient quality potato seeds to farmers active in the potatoes value chain in Zombo district, crop insurance together with increased knowledge of climate change. He challenged farmers to play their part since Trias had succeeded (played its part) in bringing knowledge and inputs closer to them through this launched project.

Speaking at the launch, the Chief Administrative Officer- Zombo Mr. Jacob Batemjetho noted that Trias is not new in Zombo and Nebbi nor to the potato value chain, but a new mindset is needed if farmers have to get the big sums of money that potatoes fetch for others elsewhere. “In Kween district, potato farmers raise huge volumes of potatoes, out of which, afford big assets like tipper lorries but I don’t see the same intensity here” - CAO Zombo district. He beseeched farmers to desist from unsustainable farming practices like the use of poor fertilizers that are harmful to the land, toxic pest control chemicals, and mono-cropping.

Speaking at this event, the RDC Zombo Mr. Kajoyingy Andrew challenged the duty bearers and rights holders to deeply reflect on why poverty has persisted in spite of the many development programs that have been rolled out. It emerged from the audience that a section of citizens is used to handouts (free things), poor family planning, negative attitude toward farming among the youth, alcoholism among the youth. This propelled the RDC to change their mindset and commit to transforming their families from peasantry to modern life. He reminded participants of patriotism i.e “Buy Uganda Build Uganda” and localized it to “Buy Zombo, Sell Zombo”.

The Civic Space project aims to contribute to an improved and sustained engagement of civil society with the government as a means of influencing and driving inclusive development.

Councillors of Persons with Disabilities Inducted

As part of strengthening instituti

Story by Kick Corruption out of Uganda

The AfricroozE is a standard bicycle supported by an electrical motor. It is a revolutionary initiative in promoting clean and sustainable transport.

District leaders ought to be change-makers