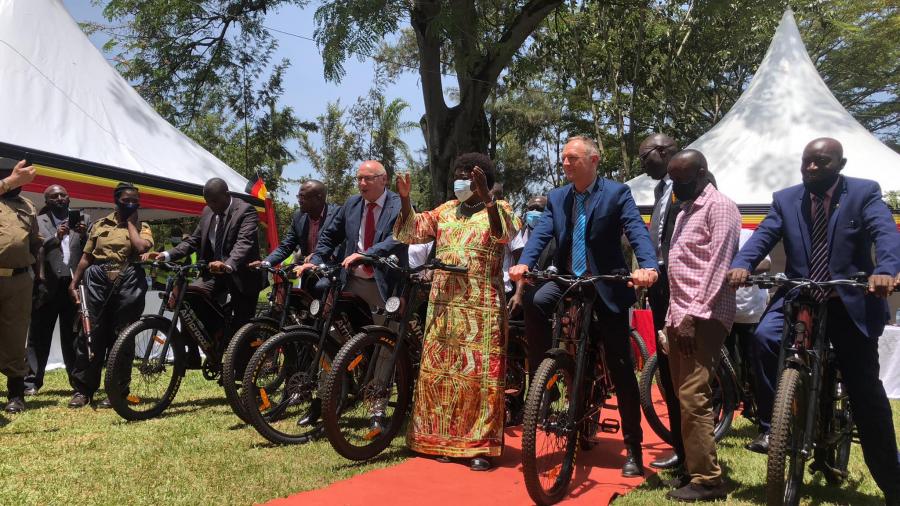 The First African Bicycle Information Organisation (FABIO) at Jinja is dealing with exactly these questions by making transport more sustainable and cleaner without losing any comfort. And actually, the solution is quite simple: the good old bicycle is reliable, cheap, and clean.

The main goal of FABIO is to sensitize the people to these problems and spread the solution of using a bicycle among them. For example, the ‘Cycle to School’ project empowers young women and men to cover their way to school with a bicycle, reducing travelling time and risk. Self Help Groups (SHGs) organize themselves to gain political and agricultural education and look for bicycle-connected means of transport.

Nonetheless, the bicycle can also have some disadvantages. Slower speed, higher physical effort, and less distance coverage are some of them. In the last years, people could have seen an increasing number of bicycle boda bodas around Jinja. However, due to the previously mentioned constraints, these drivers could only charge half the price of their motorized colleagues even though they were facing a higher physical effort. This is why FABIO, in cooperation with organisations from Germany and India, developed, manufactured and launched a promising solution, the first E-Bike designed especially for the needs of sub-Saharan Africa -The AfricroozE. An E-Bike is a standard bicycle supported by an electrical motor. Higher speed and range, less effort for the driver, and higher load but still no direct emissions are only some of the benefits of this combination of a bicycle and an electric vehicle. The batteries can be charged by electrical energy, e.g., coming from solar panels at the loading stations in Jinja and Iganga.

On Friday 11th March 2022, one hundred of these AfricroozEs were launched under high public attention. Special guests as the 1st Deputy Prime Minister Rt. Hon Rebecca Alitwala Kadaga and the German Ambassador Matthias Schauer emphasized the role of the bicycle and the AfricroozE for the mobility of the future. These hundred E-Bikes are distributed within the frame of several projects, mostly in Jinja and Iganga, concerning health, business improvement, and tourism. Riders can benefit from extremely robustly designed bicycles with a load capacity of 100+kg, 25 km/h maximum speed, and up to 40 km range. In a pilot project starting in 2017, 86% of professional E-Bike users already realized a significant income change in their business.

At least 30 beneficiaries from Jinja, who will use their new AfricroozEs for their Bodaboda business were trained by Mr. Brian Nkuutu to understand the usage of the bike and some security rules in traffic. After this, the content of their contracts was discussed, and finally, a pretest was done. All the beneficiaries seemed quite excited to try out their new AfricroozEs and bring their small businesses up to another level.

Youth Urged to be at the Fore-front of Climate Action

Uganda, being an agricultural economy, has faced very rough times with the unpredictable seasons which continue to affect the citizens economically.

Job Opportunities at Self Help Africa

Our member, Self Help Africa seeks to recruit suitable candidates for two positions.

“We need to continue giving because you die at the point you stop.” - Dr. Moses Isooba

“Philanthropy is an act of radical love. It is in our fabric as Africans and Ugandans.” - Dr Moses Isooba

Registration with the Personal Data Protection Office (PDPO) is now open up to 30th November 2022.

Our member, Self Help Africa (SHA) urgently seeks to recruit the services of a consulta

Call for Service Providers at CECORE

Our member, Center for Conflict Resolution (CECORE) in the process of selecting service