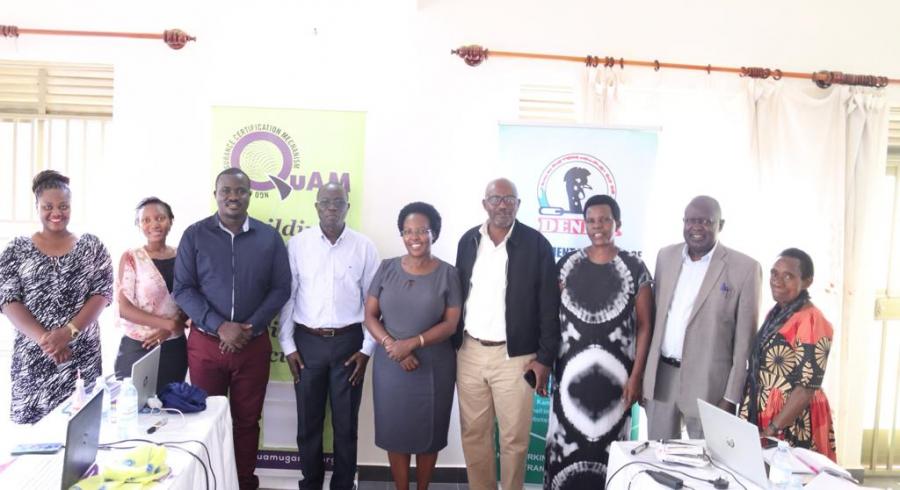 As one of the key promoters of the NGO Quality Assurance Certification Mechanism (QuAM), Uganda National NGO Forum (UNNGOF) participated in a QuAM workshop organized by the national secretariat; DENIVA in Ankole region. The four-day workshop aimed to establish and strengthen the capacity of QuAM structures, create knowledge and awareness on QuAM and enhance QuAM visibility in the region.

The workshop transcended from selecting a host organisation, South Western Institute for Policy & Advocacy (SOWIPA), a regional committee of six senior citizens ranging from civil society leaders, educationalists and local government officers, was elected and trained. Over 30 organisations were sensitised on QuAM and this culminated in a radio talk show to further amplify the usefulness of QuAM and how civil society organisations can become more accountable to communities and government.

It was cemented that QuAM is a voluntary initiative that identifies organizational gaps and acts as a capacity-building tool to enhance compliance, administration, programmatic, policies, and general management systems. Dr. Moses Isooba further echoed that QuAM assesses the substantive and procedural legitimacy of organisations. “It is through self-regulation initiatives that the integrity of the civil society sector can be sustained,” he added.

Notably, a work plan to assess the organisations that attended the workshop was developed. Two organisations, South Western Institute for Policy and Advocacy (SOWIPA) and Reproductive Health were assessed at the end of the week by the fully constituted Regional QuAM committee. The constituted QuAM committee is;

The regional QuAM committee committed to operationalise the work plan to build the capacity of the civil society organisations in the Ankole region regarding compliance and fulfilling their legal obligations to push back on the shrinking space.

The committee further pledged to take on the role of ambassadors and urged to bring on more organisations to be assessed.

Community facilitators convened for a two-day refresher training on their role in championing local solutions to local problems.

Our member, Self Help Africa seeks to recruit a suitable Office Manager.

Mental Health Uganda (MHU) seeks the services of a suitable consultant to update/validate the database of mental health services.

UNNGOF seeks applications from competent individuals or firms to conduct a baseline survey.

Last week, UNNGOF held the RAN Leaders Congress to reflect on 2022, review contexts, and plan for activities of 2023.

In this New Year Message, CSO leaders share reflections on 2022 and offer recommendations for the future as we begin 2023.

This morning, the Uganda National NGO Forum (UNNGOF) led a team of civil society organizations to engage with the Uganda Human Rights Commission (UHRC) on various issues of mutual interest.