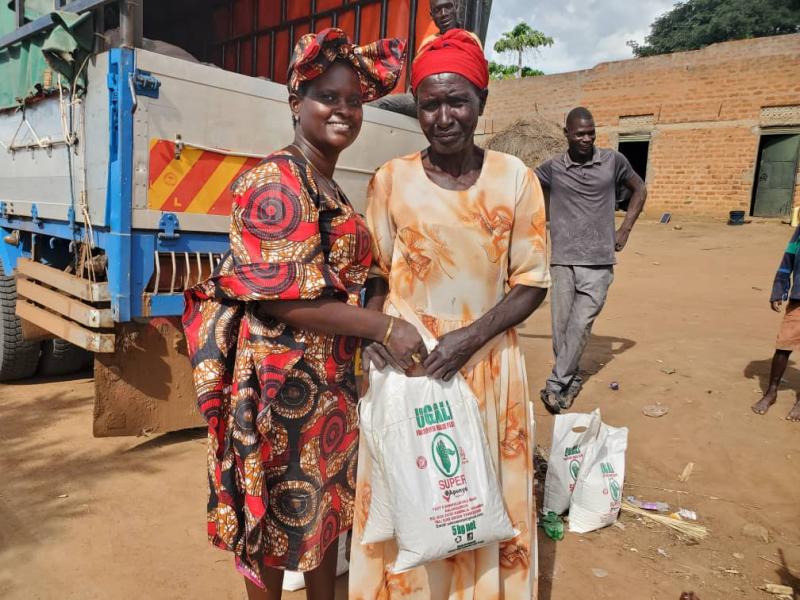 Lango Civil Society Network (LACSON) is promoting the idea of Philanthropy to provide space for local fundraising and mobilizing support to promote survival rights of the vulnerable populations in their constituencies.

With the Karimojong influx in Okwong Town Council in Otuke District, more than 15,000 people in the district have been hit by famine that claimed lives of at least 2 people. As one of the ways of reclaiming the survival rights of the affected people, LACSON championed the process of mobilizing food items for 1,500 of the most affected people; People Living with HIV/AIDS and other chronic illnesses, disabled persons, children living in child-headed households and the elderly.

The Save Otuke Community from Famine Committee was formed through a cooperation arrangement that brought together a cross section of development partners including CSOs (LACSON Red Cross, PAUL CARES UGANDA and LAYDNET), business communities, local government, members of parliament, media, local artists, companies and local leaders to plan, mobilize funds and food items and distribute them to the affected populations. The committee conducted road drives and football matches between Lango and Busoga regions. Phone calls and radio talk shows were used as means of mobilization.

The committee successfully mobilized UGX 12,000,000/-, about 5,000 kgs of beans, 10,000 kgs of maize flour and 1,500 sacks of cassava stem cuttings. The beans and maize flour distribution was an immediate response strategy, while the cassava stem cuttings were meant to meet the long term food needs of the affected people. In addition, an intermediate response has been initiated through mobilization of short gestation period agro seeds such as white beans and peas.

Youth Urged to be at the Fore-front of Climate Action

Uganda, being an agricultural economy, has faced very rough times with the unpredictable seasons which continue to affect the citizens economically.

Job Opportunities at Self Help Africa

Our member, Self Help Africa seeks to recruit suitable candidates for two positions.

“We need to continue giving because you die at the point you stop.” - Dr. Moses Isooba

“Philanthropy is an act of radical love. It is in our fabric as Africans and Ugandans.” - Dr Moses Isooba

Registration with the Personal Data Protection Office (PDPO) is now open up to 30th November 2022.

Our member, Self Help Africa (SHA) urgently seeks to recruit the services of a consulta

Call for Service Providers at CECORE

Our member, Center for Conflict Resolution (CECORE) in the process of selecting service