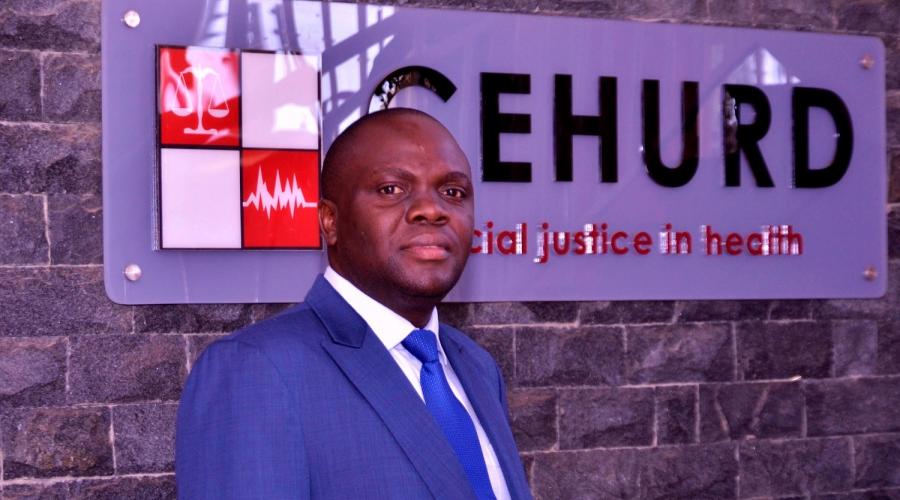 The journey of Center for Health, Human Rights and Development (CEHURD) dates back to Moses Mulumba’s childhood days; Moses grew up with his single mum (one of seven founding health workers) for Kibuli Hospital-Kampala which by then operated only an out-patient department; Upon getting the job offer by the Kakunguru family, she carried along all her children from Nagarama-Mukono to reside in staff quarters residence. Moses says, he witnessed the making of Kibuli Hospital because he started schooling from Kibuli Nursery School and then to Kibuli Demonstration School.

Moses recalls the stories of seeing sick and dead people, people crying for their loved ones because their house was very directly opposite to the mortuary and this unconsciously inspired him to think about health systems as a young boy. While at Makerere University, Moses did Law and still had interest in contributing to the Health Systems as a lawyer.

He notes that he got a lot of motivation while at University in third year when he was connected to one of his lecturers -Prof. Emmanuel Kasimbazi (a specialist in environmental law and policy that did a lot of work on right to a clean and healthy environment) whom he supported as a research assistant as he did his research papers and doctorate; Moses attests to having a chance to learn writing bids, making presentations, document stories since he would go to the field to profile most of the work on environmental issues and thus ended up becoming more of an academician and social activist inspired by actors under NAPE as well as other environmentalists like Counsel Philip Karugaba that did Public Interest cases on Tobacco control and Counsel Kenneth Kakuru who were doing incredible/inspirational work.

Moses shares another inspiring moment that shaped his vision i.e the time when Counsel Philip Kakuru gave a talk to university students on what motivated him to do Public interest cases. This was backed by the judgements that the then Justice Tabaro made on public interest cases where he cited Kenyan cases on what actually public interest case means. “It’s at this point that a public spirited litigant became something I picked very strongly” … Moses says. Moses then started reviewing Kenya’s publications which informed his meetings and it’s at this point that he formed an opinion that whatever the environmentalists were doing in the environment sector was capable of being done in the health sector.

After about 3 years of working together, Prof. Emmanuel got a Fulbright fellowship and flew out of the country with his family, Moses had to rethink on how to actualize his dream and one of the people he had met at that time was Prof. Ben Twinomugisha (a.k.a Shokoro) who had taught them a new course titled- Health, Law and Policy a course he did well and prepared a coursework paper analyzing Uganda Mental Health Treatment Act which he uploaded on SSRN and got top downloads, there is evidence that people writing about mental health still cite it. He also learnt that there were professors in New York who were specializing in mental health law and he was lucky to ‘e-meet’ Prof. Micheal Palin who challenged him to specialize in these areas. Around the same time, he connected with Prof. Seggane Musisi who also advised him to think about a specialty in mental health law.

Before completing LDC, he decided to embark on a Master’s program with particular focus on Health Law and Policy as well as Human Rights and International Law; towards its end he gets an advert seeking to recruit research fellows to do work on disability and human rights done by Stellenbosch University, the African Decade and NUDIPU. Out of 700 applicants, top 4 were chosen (from Ethiopia, Malawi, Uganda and Sierra Leone) - Moses was selected as the Ugandan student and in this fellowship you had to do a mandatory master’s degree in Public Health and support the Disability Movement in your country but also write a public health thesis. All these kept drawing Moses’ attention towards health law and policy practice.

The Birth of CEHURD ( www.cehurd.org  )

Around 2009, Moses meets with his colleagues (David Kabanda & Nasuna Viola) who had spent at least a year in legal practice and had passion of starting their own law firm; Much as Moses was interested in that innovation, he proposed a department to focus on Human Rights and Health because he had learnt that law firms abroad had public interest wings and this was the exact model he aspired to do.

They contributed money and established a Law Firm in Kamwokya early 2009. Moses was then told “Go ahead and register your department, we will support you whenever you need us” and in December 2009 he registered CEHURD as a company Limited by Guarantee.  The assumption was that the law firm would be the big business and the department(CEHURD) would be the small business, interestingly the law firm was eaten-up as the department became a fully-fledged Organization.

Amidst all this, Moses was attending a lot of meetings on health equity, health and human rights and then he joined Equinet which gave him an international travel that sought for lawyers who understood intellectual property and access to medicine, he had done a lot of work around that, he went to Bagamoyo-Tanzania for a training on intellectual property and access to medicines and on return, each trainee was asked to implement a national plan, because he didn’t have a host then, he worked under HEPS as a legal consultant; Along the way, he picked interest in what HEPS was not doing i.e public interest litigation that the environmental movement was doing and that is how he chose to slowly develop this department, that is the time maternal deaths were rampant in the country.

Moses later reached out to the donor that was supporting HEPS at that time i.e Open Society Initiative (OSI) and made a case for CEHURD an idea that was not welcome however after about 7 months they gave him feedback expressing discomfort in supporting a department that didn’t have systems but were willing to support Moses as a person (the HEPS legal consultant they knew) and gave him $8000 around 2009 to do a case on Maternal mortality and that’s when there were recorded deaths in Mityana and Arua. This case was a turn-around for CEHURD and OSI because it became their best activity of the year and even New York Times covered it in one of their editions and cited OSI as its sponsor. This opened another door of $97000 from the same donor in 2010 which was used to build internal systems i.e the volunteers then were fully confirmed as full-time staff, strategy development, and by now the law firm had been reduced to receiving instructions from CEHURD.

During the implementation of the $97000 grant, other partners interested in funding maternal health work came on board with about $75000 and later alone at the end of 2010, Open Society resolved to support the organization with a 2-year grant $200,000 and now they moved from small office in Kamwokya to a slightly bigger one in Ntinda though rent was high. Moses then started reflecting on the sustainability of CEHURD because to him “Yesterday was the only easier day than today and tomorrow because you don’t know what tomorrow holds”; this inspired him to think about their own office, a bigger team, a bigger vision for CEHURD and that is how they started saving from their grants and making a case for every ‘coin’ saved to ensure its used constructively to build a home for CEHURD.

Around 2012 he convinced his team to lookout for land to erect an office structure and with little resources available, they acquired land in Nakwero along Gayaza-Kalagi Road and construction kick-started. Moses says that as the physical construction took place, the Organization continued to thrive and this growth has been evidenced in programmes, grant size, reach and also the credibility in the sector as an organization doing advocacy on the right to health.

While at the beginning, focus was on maternal health and intellectual property work that Moses was leading on, CEHURD has since done incredible work on Sexual Reproductive Health and rights and accountability in the health sector, they also introduced public interest litigation in the health sector. For people who keep wondering how CEHURD does litigation, Moses argues that its simply because they retained both the law firm and CEHURD as separate entities; they have been using the law firm to litigate until recently when CEHURD acquired a legal aid certificate.

Moses celebrates CEHURD significance “The aspiration I got from home as a child seeing my mother struggle with weak health systems, carried it all through University has been achieved through this organization.”

Moses says, most of the savings are negotiated at the time of grant discussions and as an organization it became a policy that CEHURD ensures a 15% of the grant unrestricted budget line and this goes to institutional growth. Other costs are inbuilt in the running programs, on the other hand to some donors CEHURD would ask/asks for a 4% contribution towards institutional development (reserve fund). Moses says, this was really achieved by up to 60%. He challenges actors to negotiate though this should be backed up by an Organizational policy. He encourages that once an NGO has been in partnership with a donor for some good time, it would be important to have a discussion on institutional sustainability.

Meanwhile, CEHURD started with 3 volunteers and grew to 5 staff, to 30 to 35 and currently a team of 60 staff seats at the CEHURD house. Asked about what motivates this team to do the kind of work they do – Joselyn Nakyeyune the Executive’s Assistant notes “Knowing that waking up every day is not only about yourself but about impacting on lives of other people in the community which we really hold dear in our hearts as staff. Additionally, its also about the kind of trust we have in the leadership of the organization but also sharing the vision for the organization with staff inspires them to work towards achieving it”. CEHURD management provides opportunities for refreshing and motivation i.e reflection days, team building, recognition of staff that are doing exceptionally well on a quarterly/yearly basis.

Moses notes that valuing staff and providing full leadership are tenets that should be taken seriously by any NGO leader. Ensuring staff are certain about the future, He says “I don’t sleep when I have not secured staff salaries for at least 6 months”. He adds that as a good practice, they ensure that the internal reflection sessions are funded in their programs and so they are able to create conducive bonding spaces to help all staff reflect on their strengths and weaknesses and therefore build consensus on how to take the Organization forward.

On 7th November 2019, CEHURD had its 10 years’ celebrations at Sheraton Kampala Hotel in a memorable event for not only making 10 years of existence but for emerging as a key player in the field of advancing human rights and social justice in health; with a reputation for using bold strategies to realize and expand the right to health. This was backed by Prof. Joe Oloka Onyango, the day’s Keynote speakers’ description of CEHURD as “a vibrant, vivacious and vigorous Organisation”.

Youth should participate in the SDGs Localization

Youths in Uganda have been tasked to participate in the localization of the Sustainable Development Goals (#SDGs).

We are pleased to present the report of a Legal Environment Assessment (LEA) for HIV AIDS in Uganda.

UNNGOF is pleased to be partnering with the SDG Secretariat for the first SDG Conference which focuses on Uganda’s progress in implementing the SDGs.

On Friday 20th May 2022, all roads led to AFFCAD for the award ceremony of 363 entrepreneurs who had successfully completed their training.

Call for Expression of Interest by Self Help Africa

Our member, Self Help Africa, urgently seeks an Expression of interest (EOI) to prequalify Service Providers of goods/supplies and services for the period 2022-2025 in several districts.