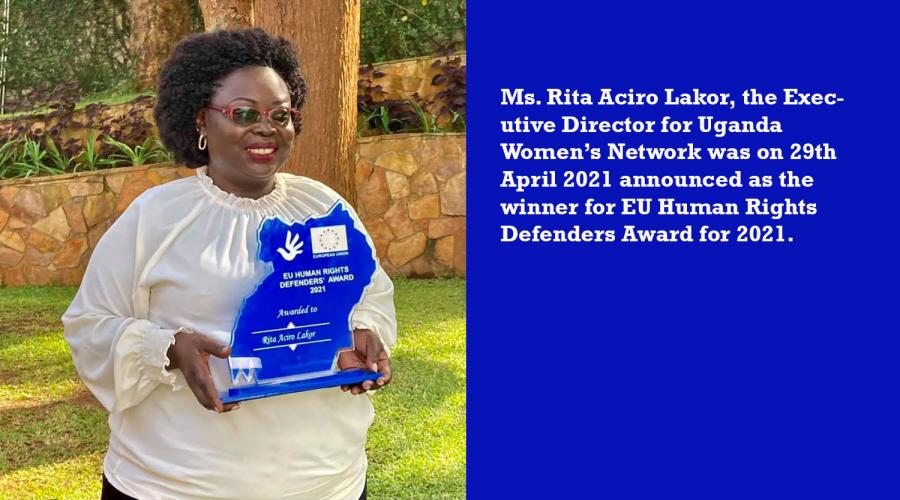 Ms. Rita Aciro Lakor the Executive Director for Uganda Women’s Network (an UNNGOF member) was on 29th April 2021 announced as the winner for EU Human Rights Defenders Award for 2021. The award recognizes her huge contribution to the rights of women and girls in Uganda and her outspoken stance on the promotion of human rights and democratic values.  The award which is now in its 10th year, is presented annually by the EU delegation together with the EU member states in Uganda to raise awareness and recognize the outstanding contribution of human rights defenders in Uganda.

H.E Attilio Pacific- the Head of EU delegation in Uganda said “The award was launched with an aim of raising awareness on the work being done by human rights defenders and as a way to celebrate or recognize their courage and determination often in very difficult circumstances”. Out of 100 nominees, Rita was shortlisted alongside two other people i.e Rosemary Nambooze the ED-Angel’s Center for Children with Special Needs and Moses Mulumba the ED- Center for Health, Human Rights and Development.

Rita has been at the forefront of advocacy and campaigning on the rights of women and girls for almost 20 years. Rita is passionate about lifting the status of women and girls and providing equal opportunities in all aspects of their lives. She has worked extensively with communities and governments in Uganda and East Africa on a wide range of issues including the role of girls and women in leadership, women land rights, combatting gender-based violence, women in peacebuilding as well as civic and voter education and election observation.

In her remarks, Rita appreciated the efforts of all human rights defenders for their selfless efforts “We are here because someone stood up for us to have a better life. Defending human rights should not be a job but rather driven by passion and compassion” She said. Rita dedicated this award to the invisible human/women rights defenders in the homes, communities and public spaces who may never have the opportunity to have the spotlight and stage yet doing credible work in giving voice to women, girls and boys.

Speaking at the event, Nicholas Opiyo the ED- Chapter Four Uganda noted that Human Rights Defenders make a huge economic contribution to this country; through their work, their resources and through the organizations that they run, and therefore are important actors in the development of our country. He further brushed off the allegations that human rights defenders receive money from foreign governments for no good purposes arguing that human rights defenders like anybody else in the country benefit from the movement of global capital just as in the same way businesses, banks and government do.

Mr. Moses Isooba the ED - Uganda National NGO Forum congratulated Rita and noted that this award was a vote of confidence to her and the organization she heads - UWONET an advocacy organization that exists to coordinate collective action among women’s rights and gender equality stakeholders for the attainment of gender equality and equity in Uganda. Moses notes “Human rights defenders are to the government what a bell is to a school. When the bell rings, it’s to draw the attention of students to something. In the same vein, when human rights defenders speak out, it’s to draw the government’s attention to an action or inaction. They keep the finger on the government pulse to ensure there is rule of law and that the Government upholds its public trust doctrine”. The Uganda National NGO Forum family proudly celebrates Ms. Rita Aciro upon achieving this well-deserved #EUHRDAward2021.